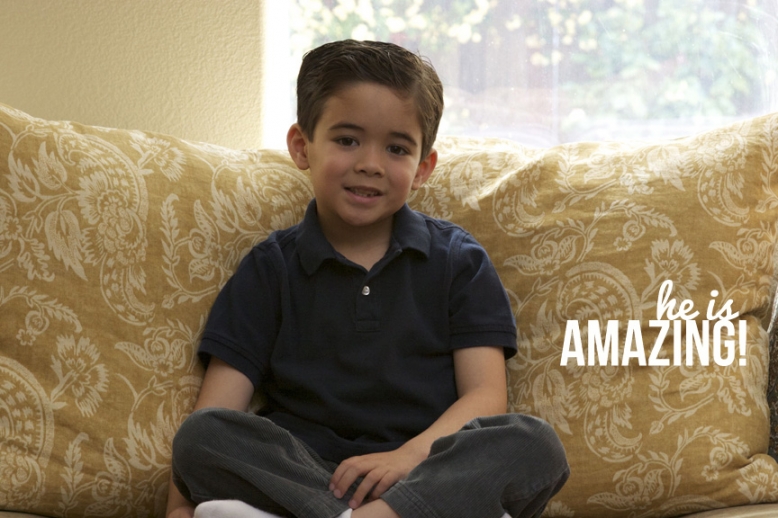 Yesterday I had volunteered to help out in Joey’s class for a full day. His Kindergarten teacher is out of town for the next three days and well, they have the Spring Musical tonight and she wanted extra hands to help out the Sub during rehearsals. The musical is about 30 – 45 minutes long. And if you have been following Joey’s story — he doesn’t do so well (in any situation) in front of a huge number of people. History shows 15 people is way too overwhelming for him. Yes, he was in the Christmas musical — and other “audience” situations prior to. And each time, D and I go into this type of event with no expectations. The fact that he is there is really all we could ask for. So, one of the bigger events prior to this day was his Kinder-Prep Graduation last June. The kid held his own; didn’t show any signs of excitement but worked through his sensory challenges. We could see it, we knew he felt it. And we were SUPER proud of him; standing on that stage with so many eyes looking towards his way and he waited patiently for his name to be called to receive his graduation medals. MAJOR goose-bumps. D & I left there telling ourselves “next time we’ll hope for a smile in there”. Then, the Christmas musical came around last year… We were surprised to see him standing in the very front and center of the entire school. Holy Batman! We were nervous for him. Again, no expectations… My little man couldn’t handle it, he couldn’t face towards the audience…he stood sideways and sang to his friend next to him…during the entire play. It’s A-OK!! We, nonetheless, were very proud of him. Have to brag a little bit — he was the best dressed kid up there, if I should say so myself!

D & I left there telling ourselves “next time we’ll hope for facing towards the audience”.

He was an entirely different kid; still in the very front of the group, off to the right… But I was totally blown away! I witnessed smiles, and singing (really loudly, by the way), and dancing AND he was facing forward. Seriously, want-to-cry!! I was SOOOOOO proud of him, more so than I’ve ever been! And they practiced OVER and OVER again. And typically, I’m his crutch (not the best thing) and he knew I was watching him and I swear, I was overwhelmed with emotion. The Principal even stopped to chat with me a bit just to say “he’s remarkable”. She is one of the very few who knows of his challenges (his history). It was just SO COOL to experience.  I shared this with D when we got home later in the afternoon. D & I never make it a big deal in front of Joey — so when I told him, as expected, his response was “no expectations, I won’t hold my breath”. Fair. But I told D, even if he doesn’t get to witness it tonight (which I think he will, hee) I will always have the experience from rehearsals and the conversation of me telling D that he came around. That we will hold onto. Because it only gets better  from here.

« Where has the time gone?Currently. »

SCROLL TO TOP
no comments